Home
Articles
Why are Bicycle Accidents so Common in D.C.?

Why are Bicycle Accidents so Common in D.C.? 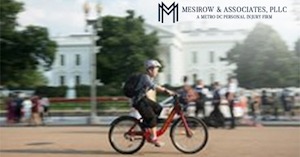 There are several reasons why bicycle accidents are happening more often in the District. Within the past few years, a growing number of people have turned to pedals instead of public transportation or taxis to navigate their commute. 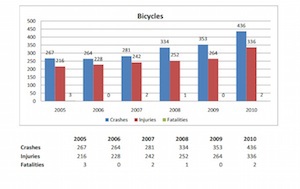 As reported by the Washington Post, bicycling has become a popular alternative to riding the Metro or hailing a cab—especially for people who live and work in the city’s bustling urban core.

The success of bike-sharing companies like Capital Bikeshare has also contributed to the D.C. bicycling boom. In fact, the city is second only to Boston when it comes to the number of bicyclists on the streets.

Distracted Driving … and Biking and Walking

There are more bicycles on the roads in Washington, D.C., but there are also more distracted drivers (and bicyclists and pedestrians) than ever before—yet another reason why bicycle accidents keep rising.

But not everyone is on board with stricter rules for cyclists. Lawmakers in other states say they have repeatedly introduced legislation to crack down on distracted cycling but have encountered difficulties getting others to rally behind the proposed laws.

What D.C. Is Doing to Reduce Bicycle Accidents

The District of Columbia has launched a safety awareness campaign specifically aimed at reducing the number of fatal traffic accidents on D.C. roads, with a significant portion of its efforts directed toward bicycle fatalities and serious injuries. To combat the problem, the District has taken the following steps:

Bicyclists can also do several things to stay safer on the road. If you bike around D.C., always stop in a safe place before using your phone to text or talk. You should also avoid using earbuds or headphones that can prevent you from hearing vehicle horns and the sound of traffic as you ride.

The human body is simply no match for a vehicle. If you have been injured as a bicyclist in a motor vehicle accident, you need an experienced and compassionate lawyer on your side. The Washington, D.C. bicycle accident lawyers at Mesirow & Associates, PLLC can help. Call today to discuss your case.