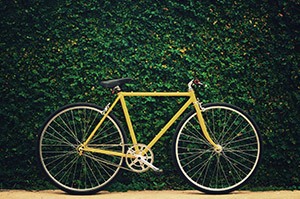 When cyclists get together (even commuters), not surprisingly, we often talk about … cycling. Recently, I was engaged in just such a conversation with a fellow bicycle commuting personal injury lawyer I’ll call Taz. (Trust me, when you hear how Taz rides, you’ll understand why he insisted that I use a pseudonym.)

We spoke at length about what it’s like to ride a bicycle on the streets of Washington DC, including how cyclists are treated by cars, the increasing number of cyclists suffering serious injuries from accidents with cars, and how so many drivers have no idea what the laws relating to cyclists are. While we agreed that many if not most accidents involving cars and bicycles could be avoided if motorists were more aware of cyclists, we did have disagree on a few things.

Taz is what you would call an adrenaline junkie. While it’s certainly not legal to ride 20 miles per hour in between two lanes of cars stuck in traffic, dodging mirrors as you go, Taz assured me that it is a blast. He said that once he built his way up to this level of recklessness, he got such a rush every morning that he was able to give up caffeine! I wouldn’t know because, as required by law, I follow the rules of the road. (See 18 DCMR 1201).

Speaking of the rules of the road, Taz also is fond of running red lights and stop signs…

I asked Taz how he justifies this. “Well,” he asked “when you’re driving, do you ever speed?” I said that of course I do, and so does everyone else. “Well,” he said, “that’s against the law.” He went on to say that he can’t speed, but, when it’s safe to do so (when there are no pedestrians or other cars in harm’s way) those are the laws he breaks. And, said Taz, just like with speeding, if he ever gets pulled over, which he has, he’s willing to pay the consequences for his law-breaking ways. Although I’m still going to follow the rules of the road, Taz makes a very good argument.

Speaking of arguments, Taz and I were in total agreement that we’d have a lot less of them with motorists if they only knew the laws that apply to cyclists in Washington DC. You wouldn’t believe how many motorists yell at us to “get up on the sidewalk!” (This even happens in the Central Business District where it is ILLEGAL to ride your bicycle on the sidewalk!) (See 18 DCMR 1201.9)

Not only do we have every right to use the roads just like cars (see 18 DCMR 1200.3), but if a lane is less than 11 feet wide (see 18 DCMR 1201.2(c)(3), we have the right to “take the lane” (ride in the middle of the lane). In fact, we both agreed that this is the safest way to ride because, if you try to ride close to the curb in narrow lanes, cars often try to pass you within the lane, creating a very real risk of being “shaved” by a car. I’ll take the lane, and the angry motorists!

We also expressed dismay that so few people are aware that, in most situations, it is legal for two cyclists to ride abreast in DC. (See 18 DCMR 1201.7). If you like being honked at, cursed at and yelled at, call a friend and give it a try. You won’t be disappointed!

And if you really want to be dismayed, look at the number of people riding around without helmets. While it is legal for anyone over 15 to go helmetless in DC (see DC Code § 50-1605), it’s stupid! As much as Taz and I like Capital Bikeshare – not just because it’s gotten a lot more people riding bicycles, but also because it has made drivers much more aware of cyclists – we agreed that users of this awesome resource are the worst offenders. It may not be that convenient to carry a helmet, but I’ve handled enough brain injury cases to know it’s well worth the inconvenience.

Taz and I could have gone on for hours, trading cycling stories. Instead, we strapped on our helmets, and hit the road, soaking in the richness of our city, getting some great exercise, and doing our small part to help the environment.